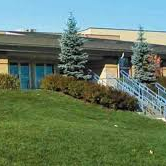 I have it on very good authority that the Mennonite High School that scarred me for life has lowered its moral standards and is now allowing — nay, even encouraging — dancing.

(No, not now during covid-19 lock down when we could assume it would at least involve 6 feet of separation between partners.  I mean, in regular years.)

In this, I fear that my august alma mater has failed to recognize that one of the core functions of the Mennonite education system is to provide its alumni with stories of youthful micro-rebellions enacted against an anachronistic school administration.

That I hosted a barn dance in my final year of high school is not much of a story. My family had recently moved to a property with an empty barn and it was no big deal to clean it, borrow some square dance calling records from the library, and invite over the class. A good — but tame — time was had by all.

It only became a story worth telling when I was called into the principal’s office the following Monday and chastised for this little piece of ridiculously mild adolescent socializing.

The principal who was old family friend, Bill Kruger,  didn’t object to the square dance itself and was sure all was fine and morally upright but he told me we needed to think about “the constituency.”

“The constituency” was always being invoked in those days — we imagined an amorphous group of humourless Conservative Mennonites (even though the Conservative Mennos didn’t support the school) who simply objected to fun and had the principal’s phone number on the ready should even a whisper of a rumour of enjoyment reach their ears. And poor Bill Kruger was tasked with being the interface between the constituency bogeymen and us.

The lesson that he appeared to be teaching us was to be considerate of those with different value systems.

Which is all fine and good.

But in the process, he gave us something so much better than a lesson. High school is only a few years of a life but the story of being scolded for hosting a square dance?

I don’t know why I didn’t see its value immediately. I grew up at the knees of a slew of Klassen relatives who had loved to regale their nieces and nephews with horror stories of their own Mennonite secondary schooling in Manitoba. Those stories always told of teen-aged versions of our elders standing up to the tyranny of their own time — usually by flaunting the rules against the mingling of boys and girls. The rules were always arbitrary and the punishments unjust.

We lapped up those stories as kids even as we imagined that we lived in a more enlightened time and would never create such compelling tales of adolescent heroism ourselves.

Until, luckily, we headed off to our own institutes of Mennonite learning and found our own arbitrary rules to break.

But what of the next generation?

If even dancing is permitted, then how will students of today develop stories of micro-rebellion to share with their own nieces and nephews? I fear we are creating a generation of Mennonite high school alumni who will graduate with no stories better than a mumbled admission to having skipped chapel once or twice.

We owe them better.

I admit this caught me by surprise.

It is so well-known that Mennonites don’t dance that I never imagined that the school that taught me about the Schleitheim Confession would ever bring the abomination that is the High School Dance into its hallowed halls. According to my source, they have even instituted that most worldly of North American teen-aged rites of passage, The Prom.

I am not sure when this happened. I can tell from my careful research (which involved googling and interviewing no one who would know) that dances, and even the Prom, have been around at the Small School in, but not of, a Big World for at least a few years.  Maybe decades.

What, I ask, has become of the constituency, that it should allow such a turn of events!?!

I, myself, as you may have gathered, had no prom. When I have met up with people my own age and the conversation eventually moves towards a discussion of adolescent trauma, I have nothing to share by way of prom misadventures. I have typically just smiled at my friends sadly and explained that I went to a Mennonite high school, so…

That is fine with me. If they continue to push me for a story, I always have the square dance tale up my sleeve. And that’s a better story than most of my friends’ tales of thwarted attempts to spike a punch bowl or drunken river cruises.

Future generations of Mennonite high school alumni may not have it so easy.

Instead of a Prom, in my day, we had a Senior Banquet.

And what an affair that was!

The grade 11 class prepared the evening for the senior class. They decorated, cooked and served the dinner. The seniors showed up in finery – not quite prom dress level gowns, more like Sunday best. And sat down at long tables to a feast and a rollicking fun evening of speeches.

There was no shortage of speech-listening in my high school education.  The senior banquet was, in many ways, the capstone of an education filled with long and dreary oratory. I am not referring to the regular sorts of lectures one might receive from a teacher or principal in a class or occasional school assembly.

No, that was not enough for us.

We were being trained up to be active members of the Mennonite community and that meant that we needed to be prepared for a lifetime of sitting in rooms where people spoke at length and in tedium. There would be long worship services in our futures, and congregational meetings, and conference business sessions. There would definitely be long-winded speeches. And so they prepared us for this future with daily chapel.

And the Senior Banquet.

The banquet didn’t have the advantage of providing us with excellent stories for the future ahead of us but it couldn’t do everything. And if some of us had imagined an after-party, the speeches had the salutary effect of  overstuffing us all with an  existential dread of what lay ahead and so, instead of a potential bacchanalia, we instead stumbled back to our quiet-in-the-land homes and cried ourselves to sleep.

But while endless speeches provided us with useful training for our futures, I struggle to imagine the future that today’s Mennonite teens are expecting to enter after having had a Senior Prom. True, they might bring their new dance skills to the few Mennonite weddings that feature awkward dancing. But apart from that, and the occasional quilting jig, I can only say that the school has apparently deprived the youth of today of stories of oppression without offering them valuable Mennonite life training in return.

But, worst could be happening. I have heard tell of  virtual dance parties.

Here’s a cocktail to get the parents through the travails of raising such teens. Make it with more ginger ale and no rum if the brats want their own. 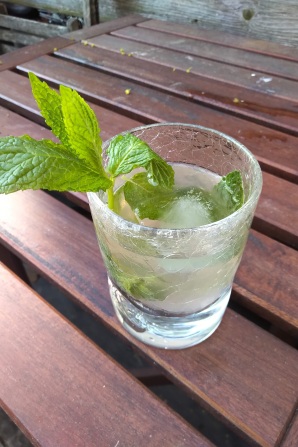 Muddle the mint leaves with the rum and syrup. Mix with ice to chill and strain into an Old Fashioned glass. Top with ginger ale and serve on the rocks.

You will get a slightly less pungent flavour with cooked rhubarb syrup but it is quicker. For that, put 2 cups chopped rhubarb, 1/2 cup sugar and 1/2 cup water in a pot. Bring to boiling. Strain and cool.

What to Drink with a Pyonder

Griping over the Grape