Pride, Mennonites and the Colour Pink

Where I live, we are just revving up for Pride Week. That means a steady stream of tourists and events building with a gradual crescendo to the grand Pride Parade next weekend.

Mennonites, of course, have a problem with Pride Week. Pride, that is. We have issues with pride. I have a theory that the whole Mennonite Church, in all its various manifestations, would have been a whole lot more receptive of LGBTQ inclusion had the word “pride” come nowhere near the issue. On the other hand, it’s hard to imagine the annual Humility Parade being a spectacle worth attending.

The people who originated the Pride events say that they’re not talking about the sinful kind of pride but you can understand the difficulty we have making the distinction. In my family, my mother saw herself as a rebel when she decided it was ok for a parent to be proud of her kid having a good report card (that was me — I had a good report card once, and made my Mom proud!). Not in a swelled-up arrogant sort of way; just in the normal, not even bragging about it to other parents sort of way. Still. It was pride.

Mind, the Pride Week organizers don’t mean parental pride either (though I don’t think they’re opposed to it). They mean pride as the antidote to shame. This kind of pride is not so much conceit as an affirmation of living without shame of who we are as human, sexual beings in all our diversity. Well, now, shame is something that Mennonites know a bit about. In fact, a good many of us are deeply ashamed of our long collective history of using shame as a form of social control and discipline. It’s hard to hold one’s head up in Menno self-satisfaction while also being aware of all the cruelty that was involved in centuries of a rigid form of Church discipline that demanded public penitence for any sexual indiscretion discovered and valued Church purity above compassion. Few see a lot of good coming out of that and we like to think that we’ve learned from our history and have turned our backs on shaming. Framed that way, we might even think of showing up to a Not-In-Favour-Of-Shaming parade.

I’m not sure what colour of flag we would wave for that parade. The Pride parade uses the rainbow which is all very confusing after years of Sunday School telling us that the rainbow was a sign of God’s covenant, promising no more world-wide floods. For all the slinging of Bible passages around among factions of Mennonites who want to be either more or less inclusive, I’ve never heard Genesis 9:12-17come into the conversation. But then, I might have missed a bit.

Before there was the rainbow flag, there was the pink triangle, and a group of US-based Mennonites picked that colour for their LGBTQ-inclusion branding. Which will be ok until a group of Mennonite survivors of breast cancer decide to go to battle with them for the rights to pink. I’m not placing any bets but there’s a lot of money behind those pink ribbons and I pity the queer menno who tries to come up against them.

Anyway, the pinkmenno campaign logo with its pink three-headed dove isn’t exactly what I’m looking for here. I want a flag that says “I’m not going to shame you for being who you are, for reading the scriptures in a different way from me, or for living out your faith in ways I maybe wouldn’t choose for myself.” I don’t know what it’d look like but I know that it’s a flag I’d wave with pride. Er. I mean humility. In my own life, I have never actually met anyone who was institutionally shamed through the formal practice of shunning or the ban. I know it from the historical record. In my experience, shame’s been more of an informal sort of process. Like it is outside of the Mennonite world. Sometimes it appears in subtle forms of exclusion, sometimes it comes in ridicule and mockery. Sometimes in not-so-loving admonition.

But imagine if we could get rid of the shame.  Despite all the doomsayers, maybe, just maybe, it wouldn’t end in a dystopia of sin and evil. It might, instead, end in some life affirming utopia that accepts all of us even with our kooky beliefs, weird appearance, and unusual lifestyle choices. You know I’m not talking about LGBTQ Mennonites there, right? Kooky beliefs, weird appearance, unusual lifestyle choices — that’s all of us.

Nothing to be ashamed of with this cocktail that celebrates intersectionality with sparkling rosé and rhubarb. It’s as pink as whatever rosé turns your crank and sparkles with the effervescence of a healthy self esteem. 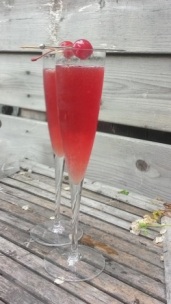 *Rhubarb syrup: place 1 cup of chopped rhubarb in one layer of a flat baking dish. Add 3/4 cup sugar. Cover with water. Bake at 375 until the rhubarb is soft and the liquid syrupy. Strain and retain syrup. Chill.

The Granddaddy of all Mennonite Literary Cocktails

Don’t Bank On It.