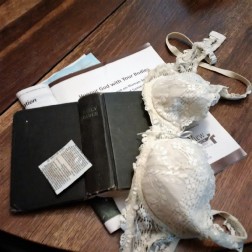 I am so grateful for your paid advertisement supplement in the Canadian Mennonite. It is about time that we Mennonites talk frankly about sex.  I know some will say that we have been talking about the issue for approximately two decades now but that’s a relatively short period of time in the history of Christianity.

Also, I’d like to commend you on overcoming your Mennonite frugality in splurging for the full glossy insert. That must have been a hard decision. I wonder at which line of your Church’s budget suffered this year so that you could send us all your little missive. I hope your Sunday School children aren’t doing without crayons this year to fund it. But, then, we all must make sacrifices from time to time.

I actually heard about your insert before I read it. As you anticipated, the insert caused “diverse responses.” Most of the controversy has, as far as I can tell, centered on the Canadian Mennonite’s advertising policy but there was also a little debate online as to whether your insert represented a new version of American fundamentalism or an older version of it. As the Mennonites in Canada have had a long history of resisting and accommodating the influence of American fundamentalist Christian thought, it is important that we know just where to place you. I like to think there’s a young Mennonite history graduate student who has just stumbled upon their dissertation topic. Which would mean something good has come of it.

It wasn’t clear to me as I read the insert whether you hoped to reach congregations like mine – Churches that try (but often fail) to be fully inclusive – or congregations like yours that try (and often succeed) to be exclusive. You say that you developed the document for your own congregational use and then wished to share it, that it might serve the Church more broadly. I am touched by your spirit of magnanimity.

There are a few parts of your statement that I particularly like.

Your statement opens with:

There are countless ways in which the call of Jesus is at variance with the patterns of this world… In this statement we focus on sexuality, particularly the church’s relationship and ministry with those who experience same – sex attraction.

It did not occur to me at first that this might have been intentional irony. Placing these sentences close together made me think that you were proposing Churches be at odds with the ways of the world, when in fact, you were proposing a really common pattern of the world. That’s a pretty clever little bit of misdirection. It’s powerful to feel nonconformist; and here you’re arguing that we could nonconform by demanding that everyone conform to some pretty mainstream ideas about sex and marriage.

I’m a fan of irony; so I like that bit. Thanks.

I was also impressed with the number of scripture passages you pulled out to support your position. At the end of the Being a Faithful Church process, we learned that all of the Mennonite Church Canada congregations hold scripture in high regard. The process also revealed that we differed in our interpretation of it, but I think you found that hard to believe and instead decided that we hadn’t read the Bible. Or had missed such important passages as Leviticus 18:22.

Now, I’m no Biblical scholar but I admit it is true that we tend to spend more time on the life and teachings of Jesus than on the passages that you highlighted, and that when we do study the passages you cite, we often fall into the error of putting them in context. It was kind of you to set us straight.

I also admire your confidence. Most of the people I know are far less confident in their assertions. They act like they can’t actually know and understand all of God’s intentions and then they do things like marvel at the enormity of a God whose image can’t be contained in little human concepts like gender binaries. But you’re not trapped by such constraints and simply know the will of God. In fact, you know it so well that you don’t even need the scriptures for all of your assertions. Which is pretty incredible 🙂

You seem to particularly like the Biblical idea of marriage creating a “one flesh” union between a man and a woman. At least, you mention it twice.  I’ve always liked this image too. Something about it resonates with the way people who know each other well and intimately start seeming as one – we have the same likes and dislikes, finish each other’s sentences, know each other’s heart. It’s really nice and I can see why Paul would call it a mystery.

But I erroneously thought this was something that could happen in any intimate relationship. I have even imagined that I saw it in same-sex couples from time to time. I see now that I must have been wrong.

Reading your insert, I now understand that this phrase is not referring to intimacy in general but to a special sex act that makes a husband and wife into “one flesh.” But I wish you would be a little more specific. I need this because I have been married a long time and borne a couple of children but never once has my flesh literally melded into my spouse’s.  When I thought that the passage was figurative that was no problem but now I worry that I must be doing it wrong. I hope that your next paid advertisement supplement will come with sex tips.

You’ve got to admit that even those scriptural passages that you cited are pretty vague on the matter. I’m not actually sure how any of your passages reflect “all varieties of homosexual activity” as, apart from condemning the rape of guests, they are pretty unspecific in varieties of activities. I understand that we shouldn’t contextualize any of the Bible but the term “sexual relations” covers a lot of territory.  I mean, I once had a handshake that left me weak at the knees. And I wasn’t married at the time. Sometimes even talking can get pretty sexually charged. Should we tell people with same sex attraction to avoid talking to people of the same sex just to be on the safe side?

As you can see, I still need more guidance. I understand that you are telling people with same sex attraction to either practice celibacy or forge fake marriages in which they can still practice “one flesh” sex as an analogy of Christ’s relationship with the Church. That the analogy isn’t at all weakened by them being in mixed orientation relationships is just, I guess, because Christ and the Church don’t always actually desire each other but when that happens, they fake it? I’d never really thought of Christ that way, but, ok.

Anyway, like I mentioned earlier, I am safe and sound in a heterosexual marriage so while I’d like some tips for that absolutely literal “one flesh” thing, I’m also looking forward to some clarity on other matters because I have some friends and family members who are not heterosexual and it’s important for me to know exactly what they need to do for me to judge them.

Thanks again for all your help!

Because it might take a while for Maple View to come back with some actual sex tips, I’ve created a cocktail to help us while away the time. Not every Church gets a cocktail named after them. I hope they appreciate the honour. This is a variation of that underage drinking favorite “Sex on the Beach” but I’ve left out the peach schnapps and given it a maple twist because, well, “Maple View.”

Shake all ingredients together with ice. Strain into a tall glass with more ice and garnish with cherries. Drink just enough of these to make you feel like your flesh is beginning to dissolve, just like, you know, Christ and the Church.