Rage against the Machines. Or Not. 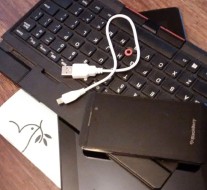 Some think it ironic that the region with the largest concentration of Mennonites in Canada east of Winnipeg is also a booming centre of Canada’s high tech industry.

Some find it insulting that this is ever considered ironic.

Those who find it ironic think of Mennonites as averse to technology. When they think of Waterloo County Mennonites, in particular, they think of Old Order Mennonites who, it is true, are not typically finding themselves employed at Blackberry or Google.

Those who find it insulting are likely to point out that Old Order Mennonites are a small percentage of all the Mennonites in Waterloo Region and that many branches of the Mennonite Church have never had problems adopting technological advances. Which is also true.

To a point.  I can’t think of a single progressive Mennonite in my broad acquaintanceship who hasn’t wrung their hands over the distracting evils of email, Facebook and/or the internet more generally. We all seem to imagine a better time when life was slower and simpler and less encumbered with devices.

But we haven’t always been late adopters of technology.

Back in the really good old days when we were fleeing for our lives and taking over Munster, no one was objecting to the technology involved. As far as I can tell, we were, in fact, all in favour of the latest information technology of the time — the moveable type for the printing press which made the Bible so much more accessible to the reading Anabaptist public.

It was a good thing.

Neither were the Mennonites of the early industrial age joining with the Luddites to smash the machines that threatened their agrarian way of life. This is, admittedly, at least in part because Luddites were in England and Mennonites weren’t allowed there. But the Mennonites in Prussia, the United States and later in Russia all participated in proto-industry and the industrial production of goods (and liquors) and gave no indication of wishing to smash their machines.

Raging against machines came later, if it came at all, and despite our reputation for technophobia, tended to be piecemeal and inconsistent. People unfamiliar with Mennonites are always puzzled to see Old Order Mennonites using cell phones or Old Colony Mennonites driving trucks. I often come across images on Twitter taken by outraged non-Mennonites appalled by Mennonites not living up to their image of a perpetual nineteenth century.

Which must be very disappointing to all the Non-Mennonites out there who think it their job to police us.

The Mennonites of my own present and past are not particularly opposed to technological innovations. My mother’s father, a refugee from the Chortitza colony in South Russia, spent much of his adult life tinkering in his workshop on various inventions never actually completed for want of the money to manufacture or patent them. My father’s parents were less interested in pushing the technology boundaries of their lives, but still, by now a number of their progeny do make their livings off the motherboards of the modern world.

But I’m pretty sure they still have their doubts. A couple of things about the modern world’s technology just can’t help but rankle.

Obviously, the biggest and most frequently cited problem is the threat that modern technology might connect us to the modern world. Ever since we began identifying The World with all things evil, machines that drew us closer to it started coming under suspicion. Even our foundational document – the Schleitheim Confession – pushed for separation from the world. Many a good schism has been helped along by disputes over just how separate from the world we all need to be. It’s hard to know just how we can be in the World Wide Web without being of the World Wide Web.

But I think we’d get over all that if these devices didn’t bump up against our thoroughly in-bred frugality.  If we could just buy one device, wrap it in a quilt, and expect it to last a lifetime or three, we’d stop our hand-wringing and run for the closest electronics dealer. I imagine that if we could buy one at a thrift shop, our concerns about distraction and worldliness would just disappear into the ether while we merrily went about setting up (closed) Facebook groups and youtubing hymnsings.

We already do those things, of course, but now we do them guiltily, tapping away on our smartphones while wringing our hands and gnashing our teeth, all the while questioning our separateness and our stewardship. Sometimes, we even rage against these little machines. Though, it’s a Quiet in the Land kind of rage. 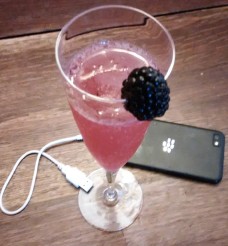 I’ve said before that I wouldn’t mess with the Conscientious Objector but the tech industry is all about innovation and so I have, indeed, messed with it and muddled a Blackberry too in the process. The Blackberry is there for its reference to Kitchener-Waterloo’s high tech industry that hires a certain number of Mennonites. This little drink may, however, be a worldly drink so indulge with caution, and hand wringing.

Muddle one of the blackberries in the bottom of a shaker. Add gin, lemon juice and maple syrup. Add ice to the shaker, close and shake until chilled. Strain into a champagne flute or coupe glass. Top with sparkling wine and garnish with the other blackberry. Take a picture, post to Facebook, Instagram and/or Twitter and then go ahead and enjoy the beverage.

A Hitchhiker’s Guide to the Mennolands

A Cordial for the Choristers

The Granddaddy of all Mennonite Literary Cocktails