Creatures of the (Menno) Night 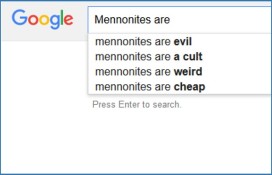 With Halloween coming upon us, it is the season again to consider all the various creatures of evil that fill the movie theatres and frighten innocent children everywhere. You know – such frights as vampires, werewolves, zombies, Voldemort-style villains, and, of course, Mennonites.

Before seeing that Google searchers like to declare us evil, I would not have known to include Mennonites in the Halloween pantheon. Thanks, Google.

I admit that the discovery surprised me. But it’s not all bad. I am relieved to know that this year for Halloween, I can just deck my house like a Mennonite domicile to give off that special sense of evil we all aspire to this time of year. Which means, basically, do nothing. Well, perhaps I’ll give out sunflower seeds this year for Trick or Treat, just to add an extra frisson to the scare the kids will get at my door.

Though really very scary, Mennonites are actually quite different from the other monsters and various frights that populate your typical Halloween party .

For one thing, we’re not much like vampires at all. Since not quite forever but a very long time, vampire lore has been infused with a strong sexual undercurrent. Mennonite lore – not so much. Vampires cannot enter a house unless invited in; Mennonites will pretty much stick our noses into anyone’s business, invitation or no. Nor can you keep us away with the sign of a cross, Holy Water or garlic. While it’s true that garlic was not a part of a lot of our traditional cuisines, many of us have absorbed enough of the local foods into our diets that we welcome rather than run from the pungent bulb.

Despite stupid jokes about Mennonite women being hairy, we’re not really all that like werewolves, either. Werewolves  are super strong, have extra acute senses and, most notably, appear to be perfectly normal all days in the month save one. Mennonites, on the other hand, are not quite normal on on any day of the month. With our firmly held belief that we should live out our faith at all times, you can be assured that our abnormality takes no break for the full moon.

Ok, yes. I already conceded that there are some similarities between Mennonites and zombies. Our penchant for community makes comparisons to the zombie horde a little too easy. It is also true that when Mennonites try to dance, we could easily be mistaken for shuffling zombies. On the other hand, zombies are also known for their inability to talk. Head to the nearest Mennonite convention or relief sale and you may see hordes of Mennonites shuffling about, but you can also count on plenty of talk. Scary talk – seemingly endless conversations about intentional community, the value of covenant, Anabaptist theology, and the best deals to be found at the Ten Thousand Villages store. Yes, frightening in its own way — just not in the zombie way.

For the Harry Potter generation, of course, the essence of evil is epitomized in Tom Riddle, the Head Boy gone bad who seeks to conquer death and leads about a gang of bigots called Death Eaters. Idolizing the martyrs of our past as we do, we’re not so into the whole conquering death bit. Nor are we such fans of torture and killing. Nonetheless, we have been accused of bigotry once or thrice. I don’t think it’s quite at the level to make us full-fledged Death Eaters but there are some who might argue that point. The real difference between us and the Death Eaters, however, is sartorial as even the wealthiest of Mennonites would never be caught dead or alive in the fabulous cloaks adorning the likes of Lucius Malfoy or Bellatrix Lestrange. Unless we’d found them super cheap at the thrift shop.

We’re not even like the evil masterminds that grace the big and small screen, scheming world domination. No-siree. You won’t find us in a secret underground lair, streaking boldly through the night on broomsticks with an army of flying monkeys, or cavorting about with all the other super-villains wherever it is that super-villains cavort. Not us. We’re more like the Quiet Evil in the Land. That’s the scariest thing about Mennonites, really. We could be lurking anywhere. You never know when we might leap out and start engaging the unsuspecting rube in discussions about social justice and/or Biblical exegesis. And once we have lured the poor fools in with our pacifist wiles, there’s no telling the damage that we can do.

Well, I mean. I could tell. But some things are too scary even for Halloween. And a Menno-nightmare is one of them. Besides. I’m busy now. I’m planning next week’s Sunday School lesson – I’ll be teaching the preschoolers the “Evil Laugh” version of This Little Light of Mine.* Mwahahahahahahahahahahahahahaha

Devil in a Thrift Shop

Today’s cocktail is a ripoff of the El Diablo because, you know, evil. I have it on good authority that a variation of the El Diablo is a particular favorite in at least one of the Old Colony Mennonite communities in Mexico, though they make it with Fresca rather than ginger beer and lime. Once again, I have added some rhubarb bitters and then declared it a new drink. Just because I can.

Measure all ingredients except for the ginger beer into a cocktail shaker half-filled with ice. Shake thoroughly. Pour into a small glass — preferably one purchased at a remarkably good price at your local thrift shop. Add ice and top with the ginger beer. Stir gently and garnish by tossing in a wedge of lime. Savour the mixture of sweet, sharp and bitter as you stroke your chin and consider just how many Mennonite conventions will be required for us to discern which evil scheme we should employ for world domination.

*No, not to worry. I have not really been entrusted with the care of preschoolers.

Reports of our Extinction have been Grossly Exaggerated

Imagining the AGM as a Cocktail Party

The Moral of the Leadership Story